Woodgreen Village Hall was built in 1930-31 and opened by Lady Hulse on Saturday December 19th 1931. The following transcript was acquired through the British Newspaper Archive ©2018 Findmypast.

£700 SCHEME CONSUMMATED
The new Village Hall at Woodgreen was auspiciously opened on Saturday evening. The building, erected at a cost of £733 on a site at the lower end of the village, given by the late Sir Hamilton Hulse Bart,. has been provided by the united efforts of the residents of the village assisted financially by the Carnegie Trust and the Hampshire Rural Community Council for Social Services, who secured a Government loan for part of the cost on easy terms. The new hall takes the place of the hut on the Common, which did noble duty for many years and which has been disposed of to the Breamore Boy Scouts as their headquarters. A building committee, with Mr Vaughan Nash as chairman, and Mr. A. C. Wardle as hon. secretary, were responsible for the erection of the new hall, and a happy feature of this organisation was that it was comprised of representatives of all the religious and social bodies in the village who will have equal claim to the use of the building.

THE ACCOMMODATION
The hall, planned by Mr. Herbert Collins, who generously gave his services, comprises a seating capacity for 194 persons.It has a stage in addition and two artistes rooms. The stage is arranged in two sections, so that it can be raised in a drawbridge manner and so accommodate a billiard table below. There is an ample entrance lobby and lavatories. The auditorium is 33ft 6 inches long and the width of the hall is 23ft 10 inches. The construction consists of 11 inch concrete cavity walls built with 18 x 9 x 4 inch blocks covered externally with stucco. The roof is covered with russet brown pantiles. Internally the woodwork is finished with Stainex brown stain.

Towards the cost the Carnegie Trust gave a grant of £130 and the Government loan is £240 free of interest for five years. In addition to this, about £400 has been raised locally, so that with sustained efforts on the part of the residents in backing the Management Committee (of which Mr. H. S. W. Edwardes is chairman and Mr. J. Philpott the hon. secretary) the hall should soon be entirely free of debt.

The opening ceremony, which was performed by the Hon. Lady Hulse, drew a packed audience. Mr H. S. W. Edwardes presided over the brief opening proceedings. He explained that the postponement of the opening ceremony was occasioned by the sad death of Sir Hamilton Hulse, one whose services to the community were well known to them all and to whose generosity they owed the gift of the land on which the hall stood. They all deeply regretted that he had been taken from them. Lady Hulse, who was always ready to do anything she could for her fellow men, even at personal inconvenience, was with them that evening in spite of her bereavement, to open the hall. Their first and pleasant duty was to give thanks to those who had brough their hall into being – Mr. Herbert Collins, the architect, for his generous voluntary services in preparing the capital plans; Messrs Dear & Sons for building it so well, and the Women’s Institute for their large share in the work of raising funds and for their gifts of a piano, chairs, lamps, books, and many other things. Without them there would have been no hall. He thought they might also express their thanks to Miss Wright for the old hut. They were proud of the fellowship which grew up there and which was now embodied in the new hall. They had also to thank the Hampshire Rural Community Council for Social Services for getting them the loan of £240 from the Government. He hoped they would be able to repay that soon. Last, but not least, they had to thank the Carnegie Trust for their gift of £130. Thus, by all the united efforts in hard times, their hall had been brought into being. (Applause.)

LADY HULSE’S CONGRATULATIONS
Lady Hulse said she would like to first of all thank Mr. Edwardes for the very kind way in which he had spoken of her brother-in-law, the late Sir Hamilton Hulse. She knew that all present there that evening realised it was with some effort that she herself was present, but she was only too glad to be there. The loss of Sir Hamilton had been a very severe one for her because not only had it been a question of relationship but also because Sir Hamilton and she had an unbroken friendship of over forty years. She was very glad to think that Sir Hamilton, only two days before his death, said how wonderfully the work was getting on and that it looked very nice. She imagined that he must have motored past it quite recently.

She congratulated them upon the very delightful hall which had been built by the energy of the Committee. It seemed to her to be a delightful place and she was quite sure that many happy evenings would be spent there. She also had tender recollections of the old hall. She had been there on several occasions and she was delighted that it was going to find a home in Breamore (as the headquarters of the Boy Scouts). She was especially interested in these halls. No doubt at Woodgreen they had some little difficulty in choosing the site. When she first decided to build the Memorial Hall at Breamore to her son some people felt it should be on Upper Street. Others said Lower Street, and others again wanted it in the middle. But they decided it should be in the “Picadilly”, as it were, of the village. (Laughter.) Outside their hall at Woodgreen they had a very good through road. They had to depend very much upon their friends from outside, and for that reason they wanted their halls to be easy of access. She did, therefore, congratulate them heartily upon the place where the hall stood. (hear, hear.)

VILLAGE LIFE IN THE OLD DAYS
She felt very strongly about these halls, because those of them who remembered village life in the old days long before the war realised what a dull thing it was for some of the hardest workers in the country when there were no halls and when any entertainments that took place had to be held in the schools. Great efforts and very admirable efforts were made with very good results, but in the case of Woodgreen it was a very long way to go for any evening of amusement. Therefore village halls were a boon. She did not expect there was now a country in the world which was so well placed as England in the matter of interest, amusement, and recreation in the villages. One could go through miles of villages in France, and especially in the north, and find not one hall – only the little estaminet to which women did not go. They all knew there was very great talent in Woodgreen – they had not quite so much talent in Breamore – and she felt sure that everything that took place in the hall, both amusement and recreation and everthing of interest, would be of a very high standard. She thanked them very much for inviting her to open the hall, and she had great pleasure in doing so and in wishing it all success. (Applause.)

The audience voiced their appreciation of Lady Hulse’s presence by responding heartily to Mr. Edwardes call for an expression of thanks.

AN ENTERTAINMENT
There followed a delightful entertainment, for which performers from Woodgreen, Hale and Breamore joined forces. The programme consisted of musical items, sketches, Scout displays, minature revues, and community singing. Miss Baker and Miss Russell gave violin selections with Mrs. Blaycock at the piano. Mr. A. Brewer, Mr. D. Hobbs, Mrs. McCarthy and Mrs. Rainey presented a sketch with a strong vein of wholesome, rustic humour. There was another sketch of a different kind, but equally lively, in which the actors were the Rev. A.P. Skene, Mr. Vaughan Nash, Mrs. Wardle, Miss Russell, Mrs. White, and Mr. John Philpott. In the latter half of the programme, Scouts and Cubs from Breamore and Woodgreen, under Scoutmaster Arblaster, delighted the audience with a display, and Patrol-Leader A. Brewer and Assistant Scoutmaster A. Vincent gave step dances, Mr. and Mrs. Gummer put on their own minature revue, “Come along up the town”, in which they were supported by Mrs. Nisbet and Miss Clark and Mr. and Mrs. Gummer, and Mr. Nash performed a song dance, “See me dance the Polka.” Miss Baker, Miss Russell, and Mrs. Blaylock contributed a musical pot-pourri, and the audience joined in community singing conducted by Miss Hadow.

THE MURALS – A PORTRAIT OF THE ARTISTS

The Carnegie Trust commissioned two students from the Royal College of Art, Robert Baker and Edward Payne, to decorate the walls entirely with murals. They were paid £100 each.

The artists were interviewed for BBC’s “The Village on the Wall” in 1973. 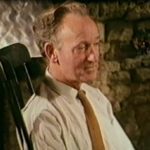 After his work at Woodgreen, Robert was given another commission to paint murals at the Welsh working men’s college, Coleg Harlech. Subsequently, he was Principal of the art school in Stoke-on-Trent and then Professor of Ceramics at the Royal College of Art. He joined the Royal Worcester Porcelain Company as Chief Designer and Art Director, where he remained until the early 1980s​. Upon retirement, Robert and his wife returned to live in Woodgreen.

Robert Baker painted the scene at the opposite end of the hall over the entrance. This depicts villagers harvesting various fruits – Woodgreen was renowned for soft fruit growing at the time. 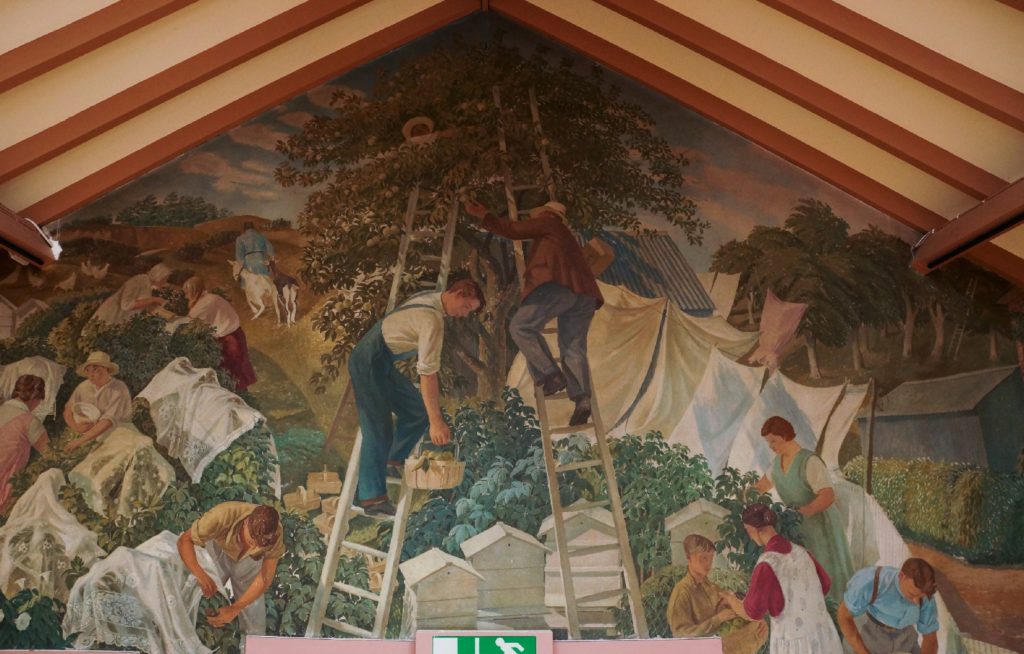 Robert also painted the wall at the back of the hall including the Morris dancing and Sunday school scenes. 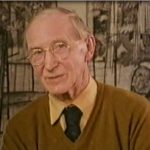 During the war, Edward served in the Royal Dragoon Guards and, although not an official war artist, produced many portraits and scenes now in the Imperial War Museum and regimental museum in York. He taught life drawing at the Stroud Art School and was responsible for the upkeep of the stained glass windows in Gloucester Cathedral. He lived for most of his working life in Box, Gloucestershire.

Edward Payne painted this summer scene – a portrait of the artists – on the lunette above the stage. Robert Baker is shown in the centre, looking out at the viewer, with Eve, his future wife, on the left. Edward himself is on the right side of the tree, courting a local girl.

In addition to the lunette, Edward also painted the roadside wall with its flower show scene.