Daisy Walker (1911-2002) delivered newspapers to Woodgreen, Hale and Breamore for more than 30 years until her retirement in 1969. The following newspaper article describes her life.

WELCOMED AS A FRIEND AT 240 HOUSES!

When Miss Daisy Walker retired as the Woodgreen newsagent at the end of February it was the end of a family business that stretches back more than 60 years. In the early days of the century, Miss Walker’s father, Mr Archie Walker, was the station master at Breamore and he found that passengers travelling to Salisbury liked to have a paper to read so he ordered a few copies and sold them on the platform.

At first, Mr Walker had trouble getting a trade discount on his newspapers. Lord Northcliffe, one of the famous Press barons, used to stay at the Bat and Ball, Breamore for fishing weekends and Mr Walker went to see him. “I don’t know what Dad said to him,” said Miss Walker, “but Lord Northcliffe soon put the matter right.” 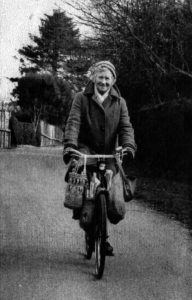 Later the business spread when people living near the station ordered papers and for about 30 years Mr Walker was the local newsagent. His daughter Daisy, one of nine children, heped him and when her father died in 1936 she took over.

For more than 30 years she has cycled through Woodgreen, Hale and Breamore delivering the papers in all weathers. Only twice in all that time has she failed to make her rounds – and that was when she was in hospital for operations. Even then, members of her family took the papers round for her.
Today, Miss Walker is a sprightly 58. Yet she has worked seven days a week.
Her day began at 4am with a cup of tea. The papers were brought to her home by van and at 5.40am she set out on her cycle. Often she did not return until early afternoon.

When she took over the business life was even harder. “The newspaper companies would not put the papers off at Breamore station,” she said, “and I had to cycle into Fordingbridge to collect them from a local newsagent. Then I cycled back to Woodgreen and began my rounds”.

She did this for about two years before finally getting the companies to unload the papers at Breamore. “Then I used to meet the train,” she said, “and I must have looked rather funny kneeling on the platform sorting out my papers for delivery.”

During the war she worked three nights a week as a night nurse at Fordingbridge Infirmary. She started work at 8pm and came off duty at 7am. “There was no time for breakfast” she said “and after the transport had dropped me at Breamore I had to get on my cycle and ride to Woodgreen and get the papers out right away.”

Sometimes the weather was so bad that she could not ride her cycle and then it was a case of walking the round. “I am pleased to say,” she said, “that I always got through.”

Miss Walker calles on about 240 houses in the area and at each one she is welcomed as a friend. “The village people are marvellous,” she said, “I don’t think there is another village like it in the country. Everyone is very friendly and they appreciate all that you do. I wouldn’t live anywhere else.”

TIME FOR A CHAT

At some houses there was a cup of coffee waiting for her in the mornings and there was usually time for a chat before moving on. “If I had my time all over again,” said Miss Walker, “I would do the same job. I have really enjoyed every minute.”

She had hoped to continue the job until she was 60 but she has been forced to retire through ill-health.
Now she will continue to live at Willow Cottage and she intends to spend much of her time in the garden.
Miss Walker also hopes to visit her family and friends and she has much visiting to catch up on – for in more than 30 years she has never had a holiday.