Hale Purlieu has been shaped by human activity since the Bronze Age. Surprisingly, in medieval times, it was used to farm rabbits. The evidence for this is a number of large, artificial warrens called ‘pillow mounds’. It is only after the warrens fell into disuse and their purpose was largely forgotten that they have acquired the name ‘pillow mounds’. This is in part due to the confusion they caused to antiquarians who often misidentified them as ancient burial mounds or Roman remains.

Unlike the hare, the rabbit is not native to the UK and although there is a little evidence that the Romano-British dined on them occasionally, it was probably an exotic foreign delicacy. The Normans are credited (or blamed) with the large scale introduction of rabbits to this country, farming them to provide a regular supply of meat and furs which they prized highly.

These early, imported rabbits were delicate creatures. More used to a Mediterranean climate, they needed to be sheltered from the harsh British winters and protected from predators and poachers. From the late 12th Century, artificial rabbit warrens formed an integral part of the economy of medieval royal and ecclesiastical estates since only the very wealthy could afford to import rabbits and farm them successfully. Ownership of a warren was a manorial privilege and the appointment of the warrener was an important and well-paid position, often with a house provided nearby.

The artificial warrens varied greatly in design but generally consisted of a low earthen mound, sometimes including stone-lined tunnels and nesting areas, surrounded by a drainage ditch. They were often sited in heathland areas for a number of reasons: rabbits prefer dry, sandy soils, it was a way of making profitable use of land unsuited to arable farming or grazing, and it kept the rabbits well away from farmers’ crops. 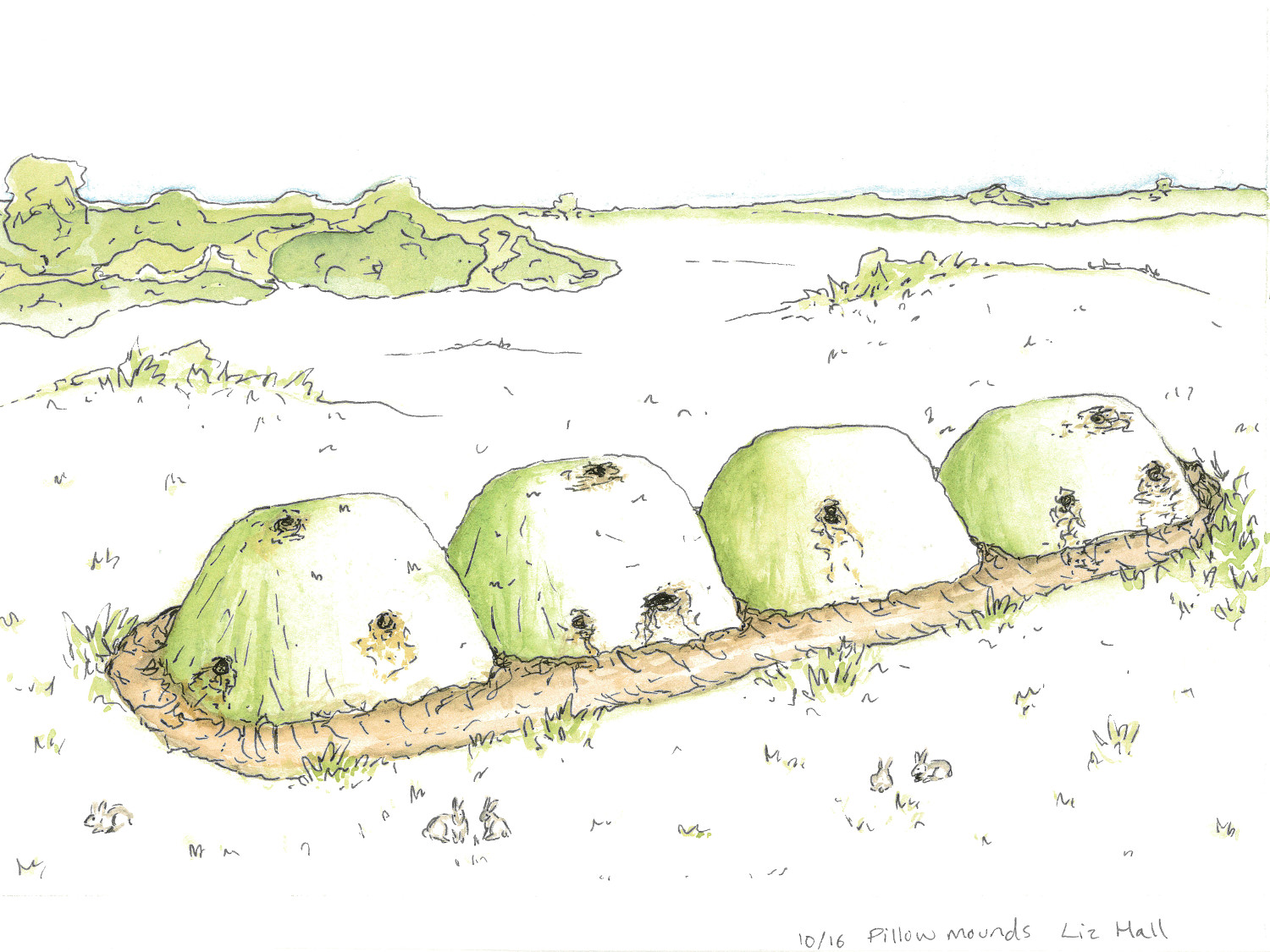 By the 16th and 17th centuries, warrens were a common feature on most manors and estates throughout the country. Many trades in the local economy also depended on warrening: skinners, barkers, glovers, dog trainers, ferret breeders and trap and net makers. The skins were often sold to factories in London where the fur was processed into felt for the hat and glove trade. While there was money to be made from rabbit meat and furs there were also plentiful hazards with large scale, organised poaching gangs and the potential for disease and bad weather wiping out a colony. The trade flourished into the 19th century but changes in agriculture and, finally, the arrival of myxomatosis, put an end to the practice.

Until the 18th century, adult rabbits were known as ‘coneys’; a ‘rabbit’ was simply a young bunny. Warrens were generally called ‘coney garths’, ‘coney-grees’, ‘coningers’ or ‘buries’. Interestingly, on maps dating back to 1789, the valley to the south of Hale Purlieu, where it drains into Millersford, is known as Cunninger Bottom.

The pillow mounds on Hale Purlieu are spaced out at regular intervals on the eastern side of a stream above a boggy area. At the south, there is a large, segmented mound which seems to be damaged or eroded. Moving north, the next pillow mound is the largest and best preserved in the group: over 90m in length, 10m wide and 1.5m high. The mound is divided into ten segments separated by shallow ditches and is surrounded by a deeper, drainage ditch. There is also a western extension running from the centre for about 20m. Further north again, there are two small mounds set at right angles alongside a path crossing the Purlieu. Beyond this, there is another large but apparently unfinished mound also with a segmented design and then at the northern end of the group, a small, rectangular mound. There is evidence of further mounds in Millersford Plantation and perhaps one in Cunninger Bottom.

It is not known when the pillow mounds on Hale Purlieu were constructed or in use. Hale Purlieu was ‘deafforested’ in about 1280 and became part of the Hale Manor. Relatively recently, it passed into private hands and was given to the National Trust by local residents in 1947. The mounds are not shown or noted on OS maps of the area from the 19th century so it is likely that they had fallen into disuse a considerable time before this. The nearby Warren Farm is reputed to be the site of the warrener’s house.