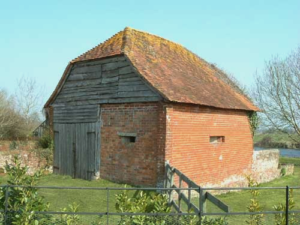 In 1940, immediately after Dunkirk, and with a German invasion a real possibility, the River Avon between Ringwood and Salisbury was referred to as the ‘Ringwood stop line’.

Both Salisbury, to the north, and Fordingbridge, to the south, and the three crossing points in between, including the bridges at Breamore Mill, were fortified. The aim was to deny west-east movement to an invading force, and particularly to tanks.

The main fortifications were three pillboxes, two constructed as additions to the mill and designed to blend with it, and the other built into the existing, roadside coach house. There were probably other defences and the site was manned by the 8th (Avon Valley) Battalion, Hampshire Home Guard.