Woodgreen began to grow into a village with goods and services for the local community in the nineteenth century. By the turn of the 20th century there were up to four shopkeepers, boot makers, coal dealers and a wheelwright. 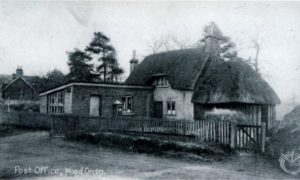 The first Woodgreen Post Office was opened on July 1st 1905 with Stephen Marlow as sub-postmaster. It was built as an extension to a 17th century cottage. By 1924, the Post Office was being run by a Mrs Noyce from the front room of her house (what is now Meadow Cottage further up the High Street).

The Post Office moved to The Village Stores in the 1930s and was run by Mr and Mrs Holder for nearly 30 years. The premises were sold in about 1974 and became a private dwelling (“The Old Post House”). The Post Office returned to its original premises, which had been an antiques shop for many years, initially with Audrey Chitty as postmistress. Further along the High Street, Jim and Jenny Hart ran a butcher’s shop and general store. This closed in 1986.

The new Woodgreen Community Shop and Post Office opened for business in 2011 and “Ye Olde Shoppe” became a private dwelling.