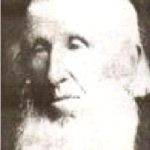 At 27, Henry Angel was convicted of highway robbery and sentenced to death. And yet, he went on to be part of a major exploration of Australia, became a substantial land and property owner, had 18 children and lived to the ripe old age of 91.

Henry was born in Woodgreen in 1791 (possibly in Holly Cottage). He was a labourer, who worked occasionally for one of his uncles and neighbours, Henry Witt. On 18th March 1817, Henry Witt travelled to Salisbury to sell some potatoes – which, apparently, Henry Angel had helped dig up. On the way back from Salisbury, he met and shared a beer with Henry Angel, George Sheryer and Jacob Spratt in “The George” in Downton. He told the men about the day’s business and the price he had got for the potatoes. As he returned home later that night, at about midnight, he was attacked and robbed of £6 9s by two men, who he recognized as Angel and Sheryer. 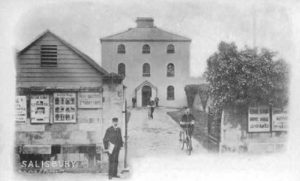 On Monday 24th March, the two men were committed to Fisherton Gaol. The case was not heard until the next Salisbury Assizes on Saturday July 26th.

Both men were found guilty and sentenced to death. In October, Henry’s sentence was commuted to transportation for life. George Sheryer was also reprieved and given a jail sentence with hard labour. Henry was taken to Woolwich and put on board a convict ship awaiting transportation. Apparently, the prison ships in Portsmouth were full at the time. 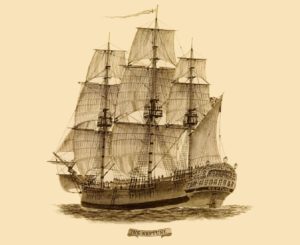 Along with 169 other convicts, Henry set sail for Australia on the Neptune on the 20th December 1817. The Neptune was a merchant ship built at Whitby in 1810. She only made two voyages transporting convicts from England to Australia before she was broken up in 1821. The voyage took 136 days, arriving in Port Jackson in New South Wales on the 5th May 1818.

Henry was assigned to the household of Hamilton Hume and worked as a farmhand. Hume was a first generation Australian and an explorer and noted bushman. In 1824, he was commissioned by the Governor of New South Wales, along with a former Royal Navy officer called William Hovell, to lead an expedition into Australia’s mysterious interior. The purpose was mainly to find new grazing land but also to chart the courses of the rivers of New South Wales. Each of the expedition leaders took three convicts and Hume’s detachment included Henry Angel. 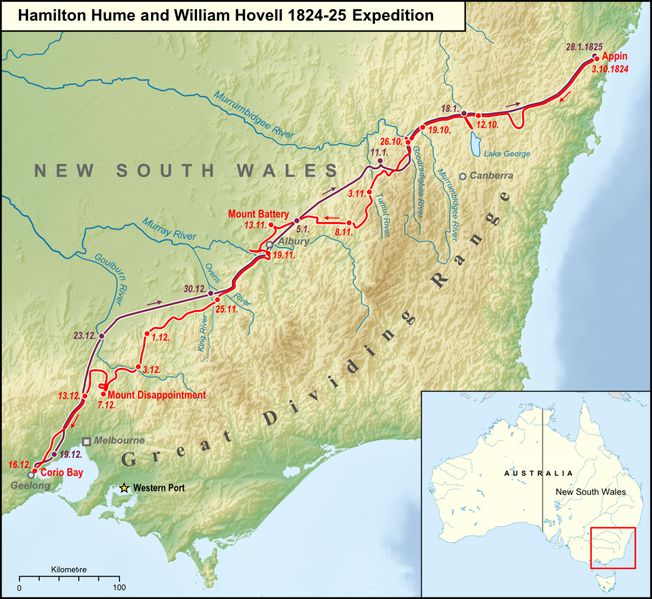 Hume and Hovell quarrelled throughout the trip and maintained a bitter feud for the rest of their lives. At one point in the expedition, they argued about the best route to take and split the expedition into two parties. They considered cutting the tents in half and even broke their one and only frying pan in half with one contingent taking the pan and the other the handle!

Despite their feud, the Hume and Hovell expedition became one of the most important expeditions undertaken in eastern Australia. It proved that the Australian interior was not, as then considered “uninhabitable and useless for all purposes of civilised man”.

The convicts played no small part in the success of the enterprise. Henry Angel and two other convicts were the first Europeans to cross the Murray River. Henry is reputed to have swum across with a rope in order to pull the wagons across. Both leaders testified to Henry’s ability in managing working horses and cattle and attributed part of their success to his careful planning of transport arrangements. On his return he was rewarded with a ticket-of-leave allowing him to freely seek employment, rather than being given a job by the government.

Henry accompanied Hume on another important expedition into Australia’s interior in 1828. This expedition’s aim was to trace the Macquarie River to its source and during the trip the party discovered the Darling River. Hume remained a mentor and friend for the rest of Henry’s life.

In 1834, when Henry was 43, he married a 21-year old widow, Mary Ledwidge. She already had two children from her first marriage but with Henry, Mary had sixteen more children!

A few years after his marriage, Henry was granted a conditional pardon and was able to acquire farmland in New South Wales. He moved further inland in 1844 with his increasingly large family and set up a cattle ranch. He periodically set off for Sydney, 450 miles away, with a ton of cheese!

Henry was described by one of his contemporaries as ‘one of the most reliable, honest, industrious men … abstemious, persevering and full of resource’. He died in 1881, aged 91 and is buried in Wagga Wagga cemetery.

Henry’s link with Woodgreen was renewed by his Australian descendants when they visited the village in 1968.

THE HUME AND HOVELL WALKING TRACK 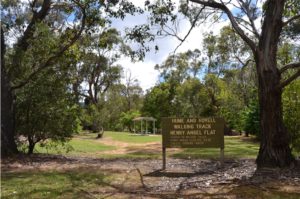 A 270 mile walking trail follows in the footsteps of explorers Hamilton Hume and William Hovell – and Henry Angel. The entire track from near Sydney to Port Phillip in Victoria takes approximately 21 days to complete. One of three major trackheads on the route is named after Henry Angel and is a popular camping area.

There was a story that Henry had been a victim of a miscarriage of justice and that his ‘wicked’ uncle had confessed on his deathbed that the charge had been false. It was also believed locally that this had been acknowledged by the authorities and Henry had been offered a full pardon and passage back to England, which he refused. There is no evidence for any of this however, and a conditional pardon granted in 1840 was simply in recognition of Henry’s exemplary behaviour in Australia.